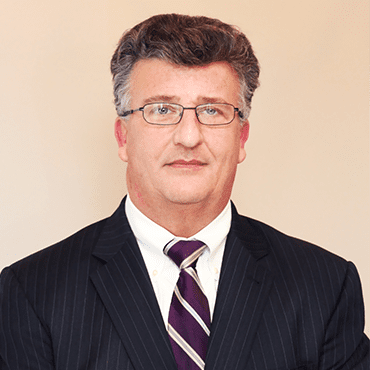 Robert Michael McKain is a senior partner in Clinton & McKain, P.C., founded in January 1998. He concentrates on helping people injured in automobile collisions, medical malpractice, product liability, wrongful death, and other complex personal injury litigation. He received his undergraduate degree from LaSalle College in 1980 and his law degree from Temple University School of Law in 1983.

Bob has an AV® Preeminent rating from Martindale-Hubbell, the highest possible rating based on legal ability and ethical standards. He is also a member of the Million Dollar Advocates Forum, which includes many of the top trial lawyers in the country, and he is a Fellow of the Academy of Advocacy of Temple University School of Law. Bob has had the distinction of being named a Pennsylvania Super Lawyer ®* as published in Philadelphia Magazine. Super Lawyers are among the top five percent (5%) of attorneys in the state as chosen by their peers.*****

Bob grew up in the Olney section of Philadelphia. His father was a Marine Corps veteran and a member of the Teamsters Union. Bob’s mother worked for Albert Einstein Hospital, Chilton Publishing Company, and the American Broadcasting Company (“ABC”). While growing up, Bob’s parents felt it was important that he, his sister, and brother attend schools that reflected their values. All three children attended Cedar Grove Christian Academy, Cedar Grove High School, and LaSalle College. Today, Bob’s brother, Mark, is a civil engineer and attorney for the Bechtel Corporation, and his sister, Kim, is an administrator for a South Jersey medical practice.

Bob married his high school sweetheart, Judy, in 1979, and they have adopted five (5) children, four boys, and one girl, over the years. Bob and Judy celebrated their 40th wedding anniversary in August 2019. They have lived for the past 25 years in Washington Crossing, Bucks County, PA. Judy and most of their extended family call Bob by his middle name, Mike, in that Bob’s father didn’t want him to be called “Little Bob” or “Junior.” However, whenever she wants to get his immediate attention, you may hear Judy address him as “Robert Michael.”

In addition to being a father of 5 children and 4 grandchildren, Bob has also been committed through the years to giving back to his community. He has served as general counsel to Cedar Grove Academy (“CGA”), member of the CGA Board of Directors, and head of the CGA PTA.

Bob also coached the Olney Kixx boys soccer teams for over 15 years. In so doing, Bob was able to forge lasting relationships with many of the hundreds of players that he encountered, and he is now proud to know as fine young men in our community.

Bob and his partner, Mike Clinton, were classmates in law school, and they strive to remember that the practice of law is a profession and not just a business. In so doing, they will often be heard to say, “it costs you nothing to be nice!” This is particularly important in dealing with injured clients who are struggling to maintain their own lives while dealing with, among other things, financial hardships, anguish over the loss of a loved one, and loneliness. They also strive to practice the same philosophy with their adversaries, who often remember it and recommend Clinton & McKain to someone in need of an attorney.

Bob McKain and Mike Clinton have each been practicing law now for over 37 years. With his youngest child, Madison, being 18 years old and the only girl amongst his children, Bob expects to be practicing law for quite some time.